World War Z (a film about a zombie apocalypse) 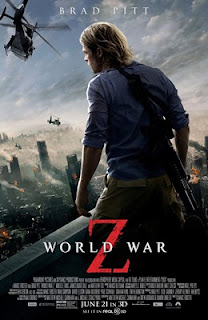 I was asked by Iggy to prepare a Sociological reply to the following questions regarding the film World War Z. First I would like to say that I did not enjoy this film. I was bored. This is a personal option, yet, if you want to see a good zombie movie I would recommend the following (in no particular order):

Night of the living dead
28 days later
Warm bodies
Zombieland
The questions I was asked to consider were, if a zombie outbreak occurred:
*What is the most realistic human reaction to the crisis?
*In what order would society break down?
*Would humanity come together or would it be a case of every man for himself?
Question one: What is the most realistic human reaction to the crisis?
Firstly, it is unlikely that social structures would break down (sorry to disappoint). Obviously such themes thrive on dooms day scenarios. But it isn’t real. Investigating the World Health Organisations previous response to epidemics… well we’re all still here… for now…
William Close wrote a terrifying book about Ebola in 1995. In reality the response of medical personnel resulted in only 11,300 deaths worldwide.
If this is compared against previous global epidemics, although it is sad that people lost their lives, the numbers are small in comparison. For example
1346-1353 the plague killed 75-200 million
1918 Influenza killed 30-50 million people
1633 Small pox in New England resulted in the death of 70% of the native population
This kind of goes to show that there are more things to worry about than Zombie invasions. But do have an escape plan just in case.
Question 2: In what order would society break down?
If, as in a zombie movie, society was to break down it would be because a large number of zombies overwhelmed the structures in place. I guess that’s why so many hospitals are filmed in zombie movies. An interesting point to consider is, if the majority of people were to be traumatised this could overwhelm and disrupts social support structures, leading to cultural trauma. However, you don’t often see the work done by psychologists in zombie movies as people try to come to terms with the fact that Aunty Emma now prefers slurping body parts to her famous casserole.
Question 3: Would humanity come together or would it be a case of every man for himself?
Social science research suggest that solidarity and a sense of community arise in times of emergency. People help each other out. Plus, the WHO and law enforcement will easily be able to identify zombies and contain the problem. Except, if there was some level of human error say at the level of the WHO then this would increase the spread of containing the problem.
Questions raised
One thing to consider is what do zombies represent socially? Are zombies a reflection of our fears of social upheaval? Or of people becoming zombie-like? I’m throwing these questions out there for discussion.
Refs:
Drezner, D. W. (2015). Theories of international politics and zombies.
Categories: Non classé
Tags: 28 days laterDreznerEmma Parfittend of the worldIggyNight of the living deadsociologywarm bodieszombielandzombies

Yay! I am happy to announce that Palgrave MacMillian will be publishing my book on storytelling research at the end of next year. This has involved 6 months of hard work, rethinking and amazingly kind Read more…