To celebrate Coventry’s bid for the City of Culture (2021), Dr Emma Parfitt, IAS ECF Fellow, University of Warwick, and Fargo village created an exhibition in the centre of Coventry on the 26th November 2016. The exhibition involved 17 artists (from all mediums and crafts) and doctoral students at the University of Warwick. The artists created pieces based on research. This event was an exciting opportunity to bring members of the public, artists and academics together with the aim of bridging the divides between art-science and academia-community.

226 people from Coventry came to the exhibition. Looking into the exhibition what struck me the most was how throughout the day there were always conversations going on. It was a lively, welcoming, social space, with kids, and perhaps I should say kids of all ages, engaging with the artists, researchers and the work that had been produced.

Some comments about the collaborations for example were:
“Useful to see research next to images as can’t always understand one on its own”
“Prenatal depression piece really well integrated and informed each other – you can tell she really responded to the piece”
“I wouldn’t usually voluntarily engage with such serious subject matter, but in this space I am happy to for some reason”
“It was amazing to see the pieces take shape in the room that morning.”

Adam Steiner inspired by Italian migration research (Georgia Wall) created three colourful paintings incorporating tinned tomato wrappers and splashes of greens and reds reminiscent of the Italian flag. One of the pieces was donated to Warwick’s School of Sociology. 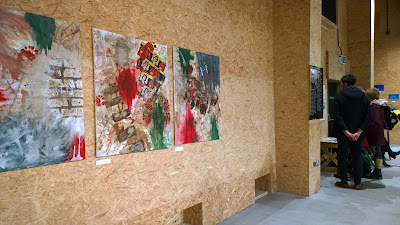 Clare Pentalow crafted paper based on Mohammed Sagir’s in physics on a certain kind of material which may mean in the future that we won’t have to charge mobile phones. A work which people described as “detailed close up, shifting in colour”. Here’s an angle taken with the exhibition reflected in the glass of art piece. 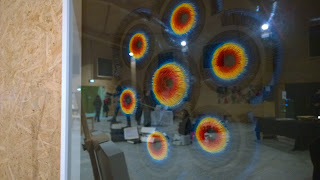 Alice Bignami Todd crafted miniature dragons and knights in Resin jewellery inspired by Alice Byrne’s research into historical perceptions of St George’s slaying of the dragons. To be available to buy on Etsy soon! 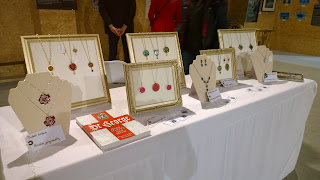 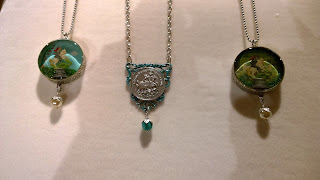 Andrea Mbarushimana personally connected with Catherine Ellis’s work on sudden unexpected death in infancy (SUDI) painting a series of pictures using mixed media, incorporating eggs, the rolling movements of sleeping babies. Andrea was approached by someone at the University of Warwick interested in displaying her pictures at another event.

Two artists from arty folk collaborated with Rebecca Noble’s research on madness in eighteenth-century Mexico. To produce a stunning sculpture that dominated the centre of the exhibition and made one young boy remark, ‘I like the big thing, the way he pulled her hair.’ 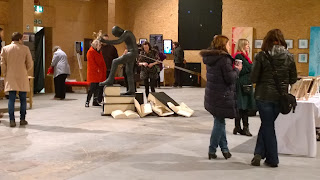 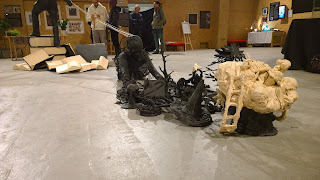 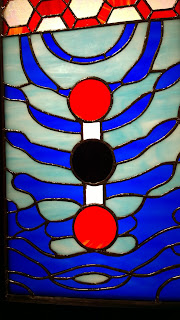 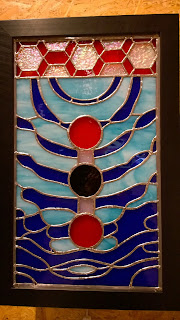 Diana Nour created fabulous detailed ink drawings of grief, and also brought along two large angelic pictures that made a statement in the room. The thoughtful outlines of figures captured stories about the grief process inspired by Deborah Bassett’s work which asks questions about social network sites where messages are created to leave behind for others after their deaths… will this human-computer interaction change the way we grieve? 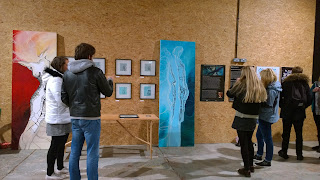 Emily Honey drew a series of very popular pictures inspired by Didem Derya Ozdemir kaya’s research on the fine-dining experience, in other words show kitchens in Istanbul, Turkey. Where chefs are on display to the dinners. Her beautiful use of colour and the social aspect of dinning, blended well with her sense of humour. 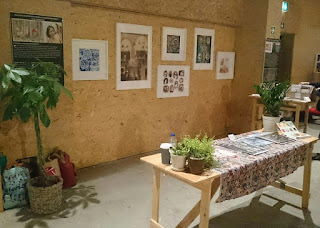 Emma Harris crafted a beautiful sculpture out of clay and mixed-material, a mother, surrounded by paper butterflies symbolising the joys and pains of pregnant and new mothers. Based on Sarah English’s research on perinatal depression. 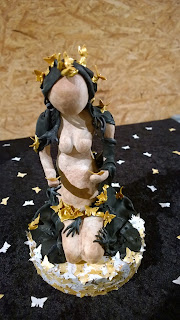 One of my favs

Eri Tsukamoto’s work on how audiences respond to animal documentaries inspired Frieda Van de Poll to fill a wall of innovative drawings incorporating paper cut outs of animals. Colourful, delightful, and emotional. This picture of a flamingo was my favourite. 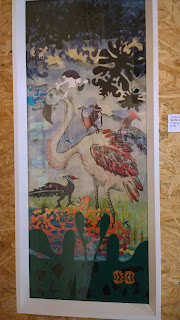 Harriet Rowles crafted one large canvas of two figures facing one another, the lower parts of their faces and voices obscured by a wave of water. This captured Dean Howes work on mindfulness. 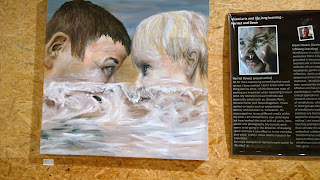 Photographer Jean Evans took two very strong photographs reflecting dementia which effects men below 65. She took images of a man surrounded by other images of people perhaps representing the faces that he could no longer remember (this researcher was anonymous). 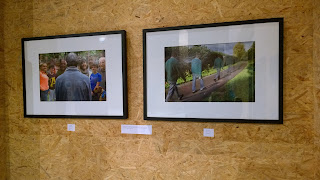 Jenny Egerton was a favourite of the young at heart. She crafted a little bedroom scene with references from many horror films such as Labyrinth and Coraline, amongst others. This was based on Catherine Lester’s research on children’s horror films. 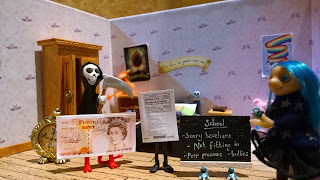 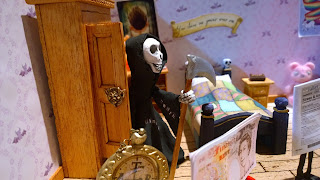 Libby Ward, a contemporary jewellery maker used a number of experimental methods to produce textured objects, like necklaces that could be stroked to symbolise Laura Tucker’s research into ex-military personnel and their relationships with companion and assistance animals. 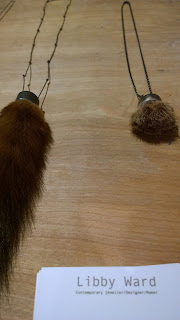 Robert Trueman experimented with the idea of randomness from Elena Achtypi’s psychological research. He took a stunning series of close up water droplets, with interesting names like ‘lnto the Jaws of Death’. 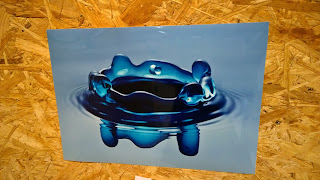 Illustrator Robin Meader collaborated with Vikki Houlden, and her research on greenspaces in urban environments. His colourful and detailed design captured the quiet spaces amongst all the hustle and bustle of modern living. 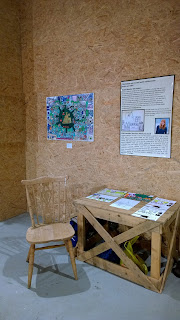 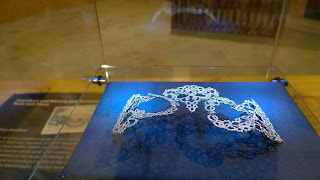 There was also some free Yoga by Selina Welter,  founder of the yummy movement, which incorporated actions like skiing and snowboarding with animals. 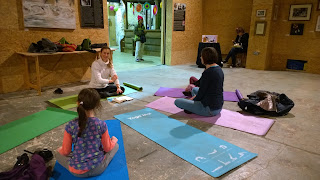 It was lovely to see people engaging with the exhibition. You know it’s been a good day when someone says, ‘It was an unexpected delight, thank you’.
Thank you for the 73 comments, and 299 votes for artist-academic collaborations, and the 226 people from Coventry, who came plus others from Leamington, Kenilworth, Rugby, Nuneaton, Redditch, Birmingham, Chilli, London, Sweden, Sunderland, Strathclyde, Leicester. It was lovely to see people so engaged with the exhibition. This event was sponsored by the generosity of Warwick Alumni, the Institute of Advanced Study and Sociology at the University of Warwick. Thank you to everyone for their support.
Categories: Non classé
Tags: artart-sciencecollaborationCoventryEmma ParfittexhibitionFargoIASinnovativeNon classéParfittsciencesociologyuniversityWarwick alumni

Yay! I am happy to announce that Palgrave MacMillian will be publishing my book on storytelling research at the end of next year. This has involved 6 months of hard work, rethinking and amazingly kind Read more…