Book research is the name of this article. Based on the initial research I have done into the lives of gypsies in the UK and fisherfolk in Auchmithie, to get a sense of their lives and challenges, I have begun to draft my early scenes in my new noval (The Fisherwomen of Auchmithie). I can’t wait till the museums reopen to visit the local area and the Lighthouse Museum again. Thanks to the website Auchmithie Roots, and their historians, I found mention of Auchmithie in The Country of Scott. Including the following description of the inside of one of the fisherman’s cottages.

He let me take a photograph of the interior of the cottage, where a single room served for bedroom, breakfast-room, kitchen, and numerous other purposes. (p.157)

So not adding much information to what I had already guessed or discovered, though I’d love to chat to an expert in working-class women’s lives in the early 1800s. The text also mentions policemen referred to as constables and ‘a picturesque old fishwife’:

A picturesque old fishwife, carrying two large empty pails in each hand, came out of her house, all unconscious of the awful presence of a loaded camera and I quickly stepped out and pressed the bulb. ‘That’s Coffee Betz you got then,’ laughed the constable. ‘She wouldn’t let you take her picture, but she’s one of the Cargills.’ 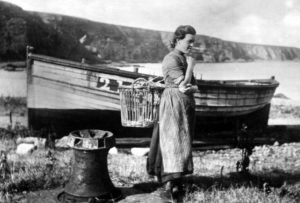 The ethics of snapping shots without permission aside, the last quote I came across about wives managing the family money (silver) is cited in this book too and the phrase ‘Them that sell the goods guide the purse – them that guide the purse rule the house’ (p.158).

And there is some useful historical context of the French-British conflicts in the early 19th century (1800s) relevant for life in Auchmithie:-

Relevant for a fishy context too; though perhaps only interesting to me … For instance, there’s a mention of bannock-fluke and cock-paddle in the book, which some additional research revealed are turbot (Scophthalmus maximus) and lumpfish (Cyclopterus lumpus) which is great to know as my main characters include fishermen and women.

There is plenty more writing and research to go. So for now, I’ll concentrate on the writing side, building my characters and making notes on the side about facts to check. These are but little details to weave into the narrative as I try to capture the lives of the people living back then on the east coast of Scotland.