Professor Jack Zipes, University of Minnesota, a world expert on fairy tales and storytelling, came to Warwick and participated in a number of events with academics and members of the public. The event was funded by a collaboration of resources at Warwick brought together by Emma Parfitt an IAS Early Careers Fellow: an IAS residential fellowship, the support of the Humanities Research Centre and the Departments of Sociology and English & Comparative Literary Studies.
Here is a short description of the fantastic events that were organised during his stay.
Panel discussion at Loughborough University
A panel discussion occurred entitled: storytelling and young people. The panel was introduced by Dr Sally Maynard and consisted of Professor Jack Zipes (University of Minnesota), Professor Mike Wilson (Loughborough) and Emma Parfitt (Warwick).
At a time of great public debate about the future of education, be that emphasis on testing of young people with a focus on the ‘rules’ of grammar, the forced academisation of all schools, or the increasing levels of mental illness and illness among young people, the panel will discuss the role of storytelling in education and whether it serves as a civilising force or an opportunity for children to realise their creative potential and determine their own futures (Mike Wilson, University of Loughborough)

‘Ask Zipes about publishing!’ A PhD workshop
A training event for postdoctoral students about publishing proposals. Those attending asked questions about interdisciplinary publishing, turning a thesis into a book and translations. The discussion was recorded to be used in a Critical Reflections essay for the IAS journal Exchanges.
French documentary Film
Priscilla Pizzato, a french documentary maker from Paris, contacted me about arranging to film Jack Zipes for a documentary about Cinderella for the French-German channel Arte.. Zipes underwent an interview with the film crew at the beautiful Cryfield Farmhouse, Leighfield Road.
Campus talk & wine reception
‘Childism and the Grimms’ Fairy Tales, or How We Have Happily Rationalized Child Abuse through Storytelling.’ 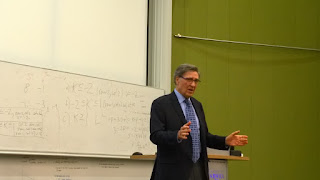 A discussion of the way in which fairy tales reflect conditions, ideas, tastes, and values of the societies in which they were created. Technology is changing the role of storytelling in society. Whether or not oral storytelling lasts, is it important to be aware of who is controlling television, and the social media. Would we be better off if more and more people controlled the mass media instead of corporate conglomerates?

Permission was refused from Sheila Bates, the Children’s Champion for Coventry, to record the event to be utilised as additional research materials for a collabourative paper. However I negotiated the presence of four observers. And a consent form by the Council was taken from each parent to allow me to take photos of the event.

A father talked to Professor Zipes and Emma Parfitt, and Sheila Bates, Children’s Champion, after the workshop and asked that the storytelling and drama workshop be part of a regular event allowing more children to attend especially those who needed help with writing skills. 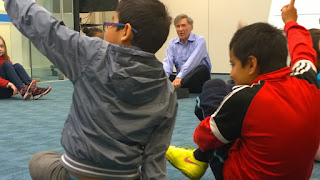 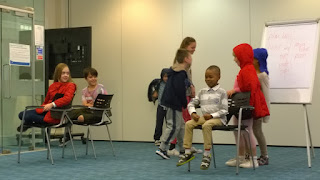 Young people from schools in Coventry acting out their version of Polly and the Wolf, an alternative Little Red Riding Hood Story. Here two wolves approach two Polly’s (in red and blue) with her family in the car.
Categories:
Tags: documentaryeventFrenchJackLoughbouroughParfittpresentationpublishingtalkWarwickZipes