Published by Emma Parfitt on 31 January 2014

I attended and spoke at this fascinating conference in Leicester. The standard of speakers was very high. Here is a link to the presentation that I gave:-
Emma’s presentation

The programme for the day was as follows:-

Part 1: Education, Emotions and the Present
Keynote: ‘Spatial Disparities in Emotional Responses to Education: Feelings of ‘Guilt’ Amongst Student-Parents’  (Rachel Brooks; University of Surrey)
Detached Youth Work: Understanding (how to be with) Young People’s Emotions (Matej Blazek; Loughborough University)
Emotions and Disaffection with School Mathematics  (Gareth Lewis; University of Leicester)
The Cry for Professional Intimacy (Fiona Birkbeck; University of Nottingham)
Reflection, Emotions, Shock and Puzzlement in the Education Workplace (Rajesh Patel; De Montfort University)
Part 2: Education, Emotions and the Future
Keynote: Education and the Construction of Hope  (Darren Webb; University of Sheffield)
Atmospheres of Progress in a Data-Based School  (Matt Finn; University of Durham)
The Narrative of Education: A Changing Force in Society? (Emma Parfitt; University of Warwick)
Widening Participation and Educating Hope (Thomas Grant; University of Leicester)
I especially enjoyed Darren Webb, Matt Finn, and also Rachel Brooks’ talk on student-parents.
What I took away from Rachel Brooks’ talk is this. That historically there is an uneasy relationship between emotions and higher education. Emotions are typically erased or managed in the education system in place of rational thought (Beard 07, Clegg 13, Hey and Leathwood 09). This is an advantage to those from privileged backgrounds. And one place where this is evident is in the provision of childcare and the ability of women to have access to suitable childcare for their circumstances. For instance this effects women’s options to return to education/work or stay in the home to provide childcare. And different women have different needs and wants in this area.
I liked the idea Brooks mentioned of social patterning. What makes a good mother, what makes a good father, as being determined by the expectations and pressures of society around families. The ‘norm’ for a family, in terms of who cares for the child, who works, in the family home.
Over all women felt more guilty than fathers for returning to university. Brooks’ argued that therefore normative constructions of motherhood are in conflict with education. And one could say that emphasis on attachment (in early childhood studies) and intensive parenting (and its effect on brain development) carries a cost for women more than men. How as woman can we validate decisions to keep working, or to return to education, if child care structures as they stand do not there to support this?
I found it interesting that more guilt was expressed by UK mothers than those from Denmark (the study compared two Danish, and two British univisersities). Brooks’ explained that in Denmark it is more usual for mothers to work while the child is young compared to the UK where women feel the weight of societal disapproval against the return of mothers to the workplace. Her work indicates that surrounding social networks have a big impact in women’s opportunities/resolve to return or continue with higher education. Brooks’ also mentioned that the state also plays an important role because they establish the ‘norms’ of child care. More needs to be done to support women who want to work, because women can feel this conflict between work and child care. Those that want to work also want to know their child is getting the best care.
Women in Denmark also received more support from their partners. Men were more involved with child care. Whereas in the UK men predominantly saw themselves as providers for the family and therefore less guilty than the women for not being as involved with child care. Though I also know, through personal experience, more men are opting to look after their children, and support their partners and get involved, to allow their partner to continue working.
The point is that those options should be there. Women should be supported and not made to feel guilty for wanting to work. Whether we like it or not female biology makes this difficult, naturally mothers want to be close to their child, they may want to breast-feed and there are not the structures to support this for the average working woman. The workplace favours men with families more than women, and understandably women are more and more caustious about mentioning family in a job interview than men. Because it is assumed that they will be the ones to drop everything and not show up to work if the child has the chicken-pox or whatever.
Therefore more provisions, more demands, need to be requested from employers, from the government, to allow women to be close to their children whilst working. And affordable child care for people who need to work to bring in enough money to live on.
Obviously as a woman who intends to have a family I have concerns about how to balance these things. Especially that it is often the woman who is expected to make sacrifices either in terms of her career or in time spent with her children. We can’t have it all. That is the reality. But we can try to find a way that works for us… that at least should be an option.

Unfortunately we don’t all have the same gumption as Kara Westlund, a full-time municipal councillor to take our children to work. I have to ask… why not? 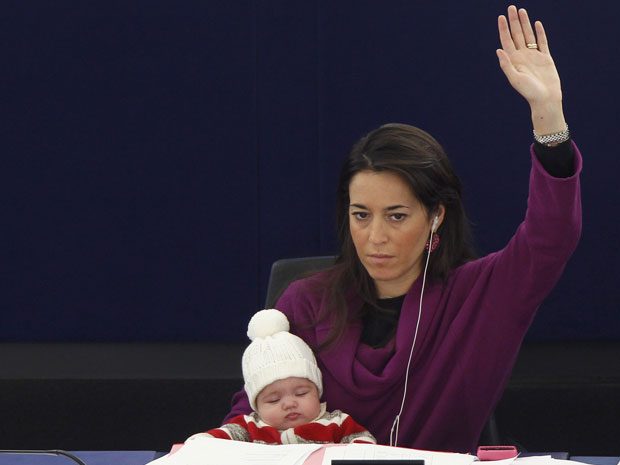