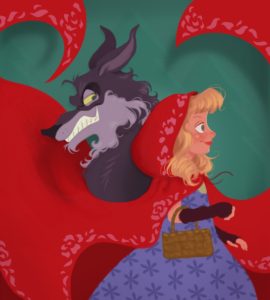 There were certain words that Red’s mother repeated ad nauseam, ‘Don’t eat on the path. Don’t leave the path. Don’t forget your bow and arrows.’ As if any self-respecting young woman on her way to visit a sick relative would prance about picking flowers in the wood, or speak to strangers. Besides the basket was heavy and the path was long.

Red’s mother often reprimanded her, ‘You add insult to injury.’ So when Red saw Ralph trying to act casual just off the path, she thought time to have a little fun. ’Hello,’ said the wolf. ‘Hello,’ Said Red. ‘What are you up to?’ ‘Oh, nothing, just taking in a nice day,’ the wolf replied. ‘What are you up to?’ ‘Taking some provisions to my sick grandmother.’ ‘That’s very kind of you.’ ‘I’m not kind,’ she said. ‘And I’m armed, in case you are thinking of trying anything funny.’ ‘Me?’ said the Wolf all large eyes and big smile. ‘Yep,’ said Red. ‘I think we understand each other. So this is how it’s going to go.’

And she told him the story of a wolf that visited her grandmother’s house, ate the little old woman, and tried to trick the little girl but ended up with an arrow in his skull.

‘Right,’ said the wolf. ‘Is there any way to negotiate this ending?’ ‘tell me a story and we’ll see,’ she challenged him. So, he talked about woodsmen, and a wolf that felt bad about what it had done and left with a small scar on his belly.

Red laughed, ‘Or we’ll fill it with stones and throw you in a river.’

‘Look at me,’ smiled Red, the rich velvety cloak, the red slippers, the bow and arrow slung across her back.

‘I believe we have reached an impasse.’

‘I need to take this thing to grandmother.’

She scrunched her forehead, ‘Aren’t you going to offer to carry it for me.’

‘I’m not supposed to go on the path.’

‘Just once won’t hurt,’ she coaxed. ‘I would be very grateful. Just don’t get any ideas.’

He eyed her dainty ankles her bared throat. ‘I really shouldn’t, but okay then.’

She let him carry the basket. It left her arms free to collect any stray flowers that dipped onto the path, onto which she kept her feet planted at all times.

‘How much further?’ said the wolf.

‘I think something is leaking,’ she said. Little ruby droplets scattered the path behind him.

A red smear had appeared at the bottom of the wicker basket, as some creamy red liquid seeped through.’

‘The wolf did it.’ Red said. And they cut his stomach open.

There were certain words that Ralph’s mother repeated ad nauseam, ‘Chew your food properly before swallowing, sit up straight and little girls tend to arm themselves with weapons.’ If one wandered off the path however she was fair game. Even folks in the village on the edge of the wood said that people who wondered from the path got what they deserved in the end. Besides, even wolves had to eat.

Ralph’s mother often reprimanded him, ‘Your eyes are too big for your belly.’ So when Ralph saw Red skipping along the path his belly rumbled. ‘Hello,’ Ralph said, ‘What are you up to?’ ‘What are you up to?’ Red said suggestively, the tip of one red shoe playing with the dust at the edge of the path. He swallowed, ‘Nothing.’ She smiled, ‘My mum is forcing me to take this basket full of goodies to grandmother’s house.’ ‘That’s kind of you.’ ‘I’m not kind,’ Red said, ‘I’m not good, and I’m definitely not stupid. So whatever excuse you have for me to step off the path this time, be aware I am armed.’ She let the basket drop onto the path and drew an arrow. Ralph’s tongue felt too large for his mouth as he swallowed.

She told him a story. That’s not the way I heard it, he said. Red sighed, go on, I like a good laugh.

And he told her the story of a little girl who got to grandmother’s house and though the cat and the goose tried to warn her she ate the blood of her blood in the rust-tinted milk, and the warm stew. But then escaped the danger herself.

‘I prefer your story,’ she said. ‘Though I wouldn’t eat my grandmother.

‘There’s something everyone in the village knows about the Red family. Don’t mess with the women.’

‘I wouldn’t presume,’ said he.

‘Help me carry the basket,’ she said, taking one of the thick handles. He took a cautious step onto the path. The basket was heavy.

‘Food for grandmother: bread and milk, cheese and ham, tomatoes and spinach, green beans and potatoes.’

‘It must be the potatoes that make it so heavy.’

‘And the cake.’ She said 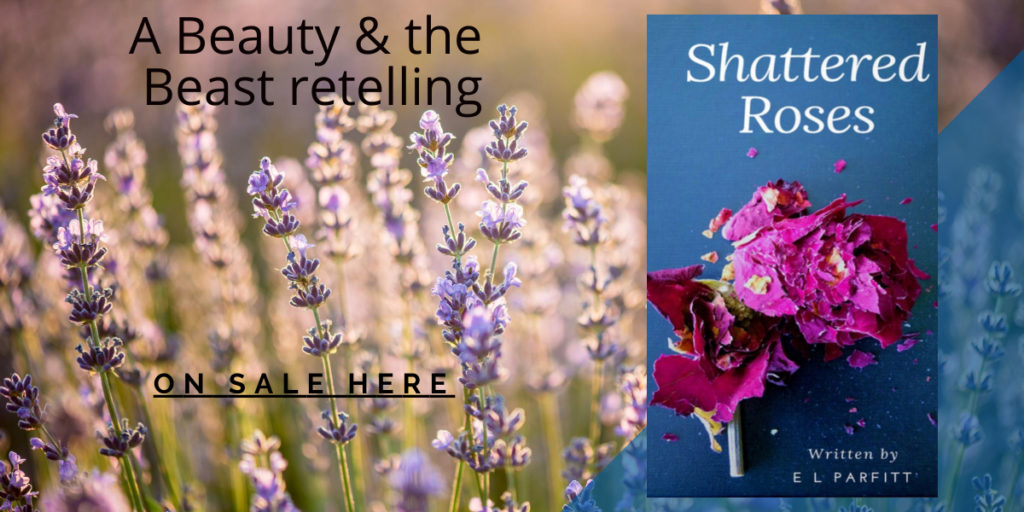 Currently promoting your book? If you click the link here and mention my name you’ll get one free month of book promotion as part of a review programme. Think review exchange.